When I first heard about the Lift conference from Danny Iny at Mirasee, I was about as excited as getting a root canal. Maybe a little less.

It’s not that I didn’t want to learn more about how to build a coaching business.

But I already knew a good bit, and there are so many of these things going around. 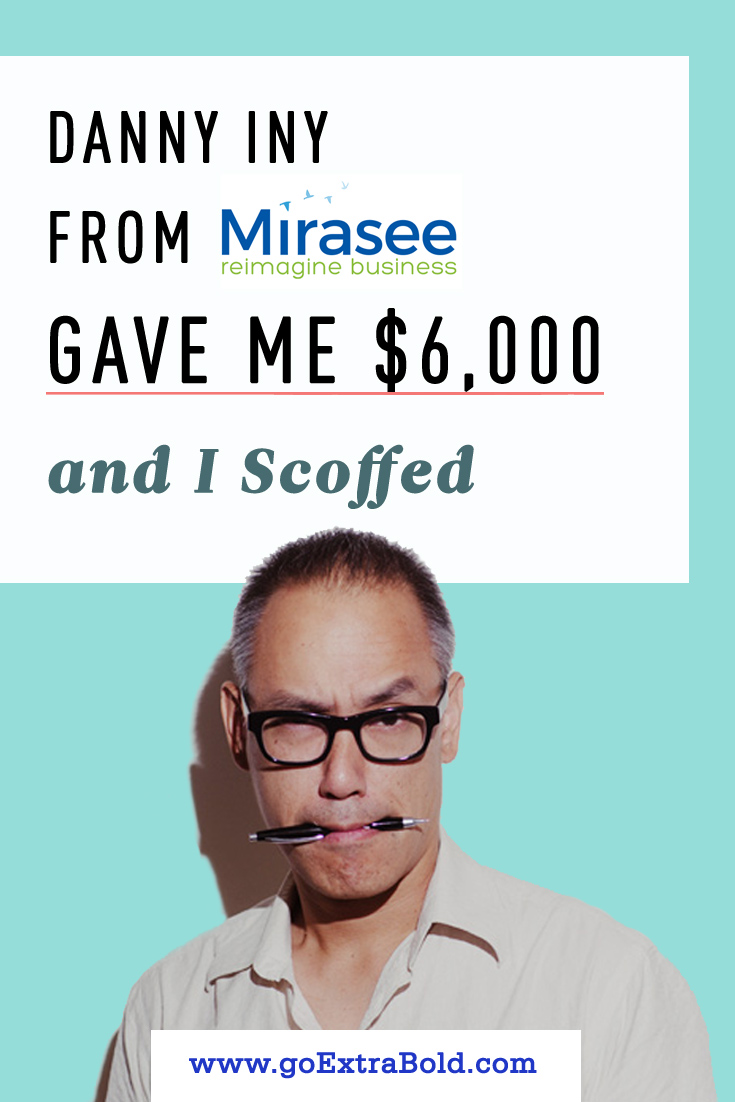 Not to mention they’re all essentially the same. You get there, they pump you up, the crowd cheers, everyone shares their story, while the mic gets passed around, and you roll your eyes deeply into your head, because you know what’s going on.

It’s just another chance to pitch you.

Then, you go home, and you’re puffed up for about a month, with more notes than you know what to do with, and that is the end of that.

So I never would have gone, were it not for the fact that my friend Belinda invited me. Oh. And it was free.

In fact, how much did I even know about Mirasee? Well, lessee…

When I open it, I see that there’s a link that says I haven’t opened an email for way long, so if I still want to get in on the goodness (my words, not Danny’s), then I’d best click it, or else I’m out.

Of course I discovered this email months after I was booted from the list. Which is to say that even though I was on their list, I didn’t know much about Mirasee at all.

So if you’re thinking that maybe I was a bit reticent, you’d be right.

Add to the mix that on a comfort scale of 1 to 10, where 10 is your social butterfly who just basks in the company of others and 1 is your run-of-the-mill, pale-skinned, underground hermit who is about as entertaining as week-old cheese I’d rank…oh, maybe a 1.3. Making me about as good as, maybe, 5-day-old cheese.

So crowds aren’t my thing.

Now, the thing about being an entrepreneur and a coach is that running your own business means picking your own audience. It’s up to you to attract the right people, and if you’ve done it for any measure of time, you know it’s a very deliberate thing you do (or at least it should be).

…your audience says everything about who you are, and this audience was conspicuously different from many.

And I was a little more than surprised to see that talking to people at Lift was actually….easy.

In fact, the attendees were downright pleasant.

No ego. No pretense. They were there to learn and grow and you didn’t feel like anyone talking to you was there to use you.

And it didn’t hurt that Danny had done everything possible to make sure people felt comfortable doing so. From the tone of the staff to the way the seating was arranged and all the little things in between, he did something that I long considered near impossible.

He made talking with complete and total strangers fun.

But getting back to it, I tend to think that looking at your audience says everything about who you are, and this audience was conspicuously different from many.

So it shouldn’t come as a surprise that when showtime came, there wasn’t really much of a show at all.

Danny didn’t burst into the room through a crowd of high fives and adoring applause. There were no lights flashing, music blaring, or people chanting. He wasn’t cool. He wasn’t slick. You might say he was the anti-Tony Robbins.

He was just him, as he was. A person who let his actions speak, which, in this day and age, was like a cool breath of fresh air on a hot summer day.

He simply stepped out and shared.

I remember a moment late on the first day, when I was sitting on the couch just outside of the main hall. It was about 1 minute after talk time, and everyone else had gone in but me. I was replying to an email from a client on the phone.

I heard the elevator doors open, and I saw Danny step out, on his way to his talk.

He was wearing his blue shirt and black slacks, and he looked over and smiled.

And it was at that exact moment that I knew Lift was something wholly different.

He almost understates the value of the information he gives. It’s easy not to realize just how much he brings to the table, if you don’t think about everything he says. In fact, he targets his information at an audience that’s generally much earlier in their businesses than I am. But he draws from a deep well, and it was a clean, clear, and refreshing well.

Instead of gloss, he gave impact. Instead of excitement, he gave clarity. He created the type of lasting experience that actually stays in your heart and makes its way to the bank.

Yes, I scoffed at the thought of going to Lift. It wasn’t the type of mega event that sets the Internet on fire.

But when I first heard about it, I didn’t realize that was the real beauty of it. How personal it felt. How thought out it was. From his staff to his speakers to his guests.

Sometimes, when I teach people to sell, I tell them that they want to wrap their clients in a warm blanket of care. And that’s just how I felt at Lift.

No smoke and mirrors. No bark without bite.

So real, in fact, that it made me $6,000 in less than a month after the conference. Danny detailed something called the WOOP framework, which is a simple sales framework.

It stands for Wish, Outcome, Obstacle, Pain, and he took us through the exact steps you’d need to use it to get a client.

So when I got home, I decided to give it a go, and I changed my pitch. And guess what? Straight out of the gates, my first time using it, I booked the client, just like that. 6 months of coaching for $1,000 a month.

The truth is, Danny doesn’t hold back.

Generally, I don’t make a habit of talking about conferences, because it’s usually about as dull as dirt. But I really loved Lift. To the point that even I, as my introverted self, found myself talking into the microphone to share my own story to the rest of the room.

You get me to do that, and you know you’ve done something special. Plus, did I mention it was free? Though, frankly, it would be worth it, if you had to pay to get in.

You can get tickets to Lift Live by clicking here.

BUILDING A COACHING BUSINESS? Sign up for the free Mass Influence course, and learn how to get clients who love you.